Luke Skywalker fought on many fronts of the Galactic Civil War, battling the Empire both from the cockpit of his T-65 X-wing and on the ground with his lightsaber and trusty DL-44 blaster. Wherever the war effort took him, Skywalker was a symbol of hope to his fellow Rebels and soon Star Wars™: Legion players will get the chance to experience him like never before.

Whether leading the fabled Rogue Squadron or a small strike team, Luke Skywalker earned his reputation as one of the Rebellion’s most enduring heroes through countless battles and this Limited Edition expansion depicts him as he appeared during one of the most iconic clashes in the Star Wars saga: the Battle of Hoth. Wearing his Rebel flight suit and perched atop the wreckage of his T-47 airspeeder, this version of Luke Skywalker is ready to continue the fight on the ground.

Not only does the miniature included here bring a totally new sculpt of Luke Skywalker to your Star Wars: Legion battles, you have the freedom to customize it to fit your personal taste. The miniature can be assembled carrying either Luke’s lightsaber or his DL-44 blaster and with or without his flight helmet. Additionally, if you decide to include the flight helmet, you can also choose whether Luke enters battle with its visor up or down. 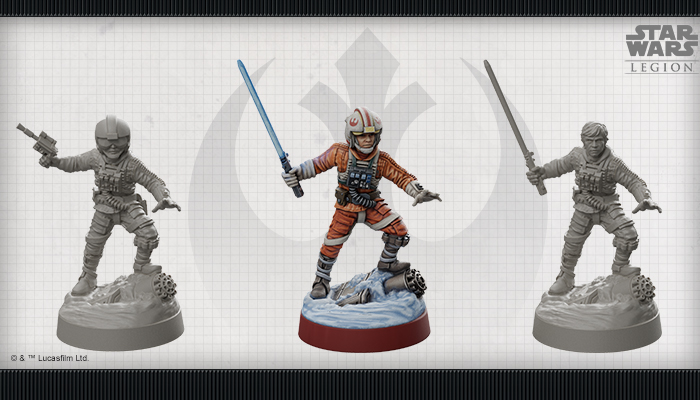 However you decide to assemble your miniature, Luke Skywalker is as skilled as ever on the battlefield. This expansion also contains a unit card with abilities identical to the Hero of the Rebellion version of Luke Skywalker found in the Star Wars: Legion Core Set, but now featuring updated artwork matching his new appearance. Additionally, you’ll also find copies of Luke Skywalker’s command cards My Ally is the Force, Return of the Jedi, and Son of Skywalker featuring this updated artwork alongside the unit card. Finally, to ensure Luke Skywalker is fully prepared for battle, this expansion also contains reprints of four upgrade cards: Emergency Stims, Environmental Gear, Force Push, and Hope.

We have a 30-day return policy, which means you have 30 days after receiving your item to request a return.

To be eligible for a return, your item must be in the same condition that you received it, unworn or unused, with tags, and in its original packaging. You’ll also need the receipt or proof of purchase.

To start a return, you can contact us at customerservice@hairyt.com. If your return is accepted, we’ll send you instructions on how and where to send your package, and if the return is from a result of our error, we'll also send you a return label. Items sent back to us without first requesting a return will not be accepted.

You can always contact us for any return question at customerservice@hairyt.com.


Damages and issues
Please inspect your order upon reception and contact us immediately if the item is defective, damaged or if you receive the wrong item, so that we can evaluate the issue and make it right.

For most items, manufacturing defects must be brought directly to the manufacturer. We will inform you if that is the case, and help you locate their contact info.


Exceptions / non-returnable items
Certain types of items cannot be returned, like custom products (such as special orders or personalized items). We also do not accept returns for hazardous materials, flammable liquids, or gases. Please get in touch if you have questions or concerns about your specific item.

Due to the constantly fluctuating prices of TCG Singles, we cannot accept any returns of TCG Sealed or Singles.


Exchanges
The fastest way to ensure you get what you want is to return the item you have, and once the return is accepted, make a separate purchase for the new item.


Refunds
We will notify you once we’ve received and inspected your return, and let you know if the refund was approved or not. If approved, you’ll be automatically refunded on your original payment method. Please remember it can take some time for your bank or credit card company to process and post the refund too.